Not your typical hamburger pie, this one is crowned with a cozy cornbread topping that has a moist interior with a crunchy top.  The triple Cheddar cheese and jalapeno cornbread topping perfectly complements the slightly peppery ground beef base.

Though this dish isn't extremely peppery; if you have any family members who are a little pepper-skittish, of course you can omit the jalapenos from the cornbread topping and substitute the pepper jack cheese with Cheddar or Colby Jack cheese.

You and yours will enjoy this hamburger skillet pie as a satisfying and comforting weeknight meal.  I've also provided directions for using the topping recipe for an 8" or 10" skillet of just cornbread. 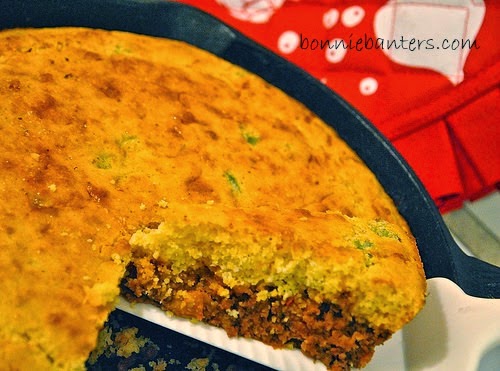 Oh boy, this scrumptious pie was a big hit at my son's recent birthday!  He loves cherry desserts, and I opted for this incredibly delicious, yet easy pie.

I used frozen pitted dark, sweet whole cherries, rather than the tart cherries as recommended in the original recipe.  I did not adjust the sugar for the sweet cherries, and the pie was terrific.  So either sweet or tart cherries should work with the same amount of sugar as specified in the original recipe.  It should also be very good with other fruits, such as strawberries or blueberries...oh, I'll be experimenting with other fruits in this recipe!

It's supposed to be refrigerated before it's cut; but I didn't, since I wanted to photo before the birthday get-together.  However, it does slice better refrigerated.

This pie has an almost cake-like topping...one person described the flavor as similar to a cheesecake.  It's tempting to say it has a custard-like topping, but this recipe has too much flour for that.  Anyway you describe it, it's fantastic!

I included a link with great directions for cutting foil to cover the edges of the pie to prevent over-browning.  At one time I used a pie tape...is that made any more, or what is your preferred method?

I know you and yours will love this pie as much as we did! 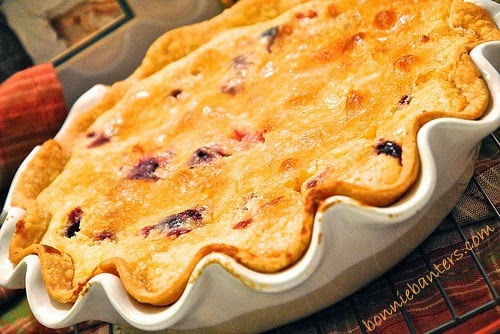