My brother asked me for a yellow squash recipe, so I said I'd just blog my favorite.  There are many varieties of summer squash, and they are harvested from early summer through fall. 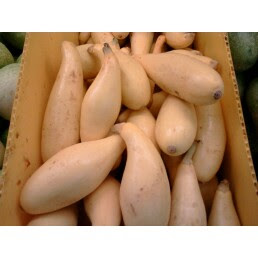 The following recipe is my version of a recipe shared with me by my baby nurse.  Yes, I had a baby nurse for a couple of weeks after my first was born! I quoted Prissy from Gone with the Wind:  "I don't know nothin' 'bout birthin' no babies" (nor taking care of them). All right, I also had her after my second was born; apparently "givin' birth" affected my memory for taking care of a newborn.

1.  Heat oven to 350 degrees. Wash the squash, slice into about 1/2" slices and boil in water until tender (or until a fork is easily inserted). Drain the squash very well in a colander. Using a heavy-duty mixer with a large bowl, mix the squash and onion with the butter, salt, pepper and nutmeg.  Add the eggs, cheese and 1/2 c. crackers*.

2.  Spray a shallow, approximate 9 x 1 1/2 (nine by one and one-half) inches round oven-to-table cookware dish with a butter-flavored cooking spray. Pour the squash mixture into the cookware.  Top with the remaining 1 c. crushed crackers* and bake approximately 35-40 minutes or until the topping is golden brown.  Enjoy! 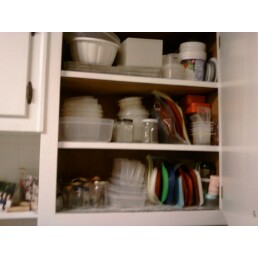 My Storage Cabinet:  It happens every time, never fails - After dinner with my daughter recently, I started to reach for the perfect container and lid to store a leftover in the fridge; and I found myself pulling everything out.  "As usual," some pieces just fell on me.  Well, "as usual," this was the last time this was going to happen to me!  I proceeded to reorganize the whole cabinet, "as usual."  This project took me at least 45 minutes! You see, I'm a confessed (somewhat neat) pack rat.

My daughter and her (neat) husband bought me a whole new set of containers hoping I would toss my cream cheese containers, jars, etc. However, you see,  I really do need all this to send things home with people. My rule is that if it doesn't fit in the cabinet, I don't keep it.  That cabinet sure is getting tight though.  Guess who shows up at Thanksgiving with all the containers for taking home leftovers?


Posted by BonnieBanters at 11:56 PM 1 comments


Some Would Call It A Tart or Galette... 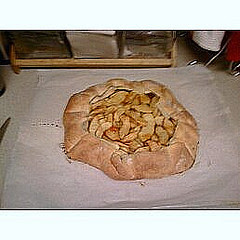 If you're feeling really lazy, you can make a smaller pie for 3 to 4 people. Just use one crust and not roll it.  Divide all the other ingredients. Oh, come on, I know it's hard to divide an egg! Just toss  what you don't need!  Bake maybe 40 minutes or until the crust is golden brown.

1.  Heat oven to 350 degrees.  On parchment paper,  place one pie crust on top of the other and roll out the stack to form one 15" circle (it doesn't have to be perfect). Carefully pick up the parchment paper with the crust and transfer to a baking sheet.  Spread 1/4 cup of the preserves* on the crust, leaving about a 2" border.

2.  Peel and core the apples and cut into about 1/4" slices.  In a large bowl, toss the apples, flour, lemon juice, ginger, 1/2 tsp. of the cinnamon,* nutmeg, and 3 TB of the sugar.*  Spread the mixture on top of the preserves on the crust and dot with butter, still leaving about a 2" clear border of the crust.  Fold the edges of the crust over the fruit mixture, roughly crimping the dough to fit.

4.  In a small saucepan, melt the remaining 2 TB preserves* with 1 TB water over medium heat until liquid, about 2 to 3 minutes.  Brush melted preserves onto the fruit.  Enjoy warm, room temperature or cold, with or without a good vanilla ice cream.

A Day at the Fall Festival:  Marshmallow Shooters and Male collars - no they're not drinks, nor male bondage.  Apparently the marshmallow shooters are toy guns that actually shoot marshmallows. (I expressed my disappointment they were not drinks:  "Well, we're out of here!" to the cackles of the vendor.) At another booth: the male collars are actually bibs for commuting or dining. (Though this vendor insisted they be referred to as "collars," I told her "they're bibs.")  You never know what you'll find at these festivals! 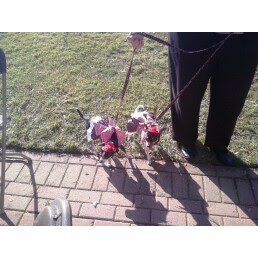 Posted by BonnieBanters at 1:12 AM 0 comments

Well, I had to cut into it - it was perfectly ripe.  Now I feel pompous because I, upon my very first try, have successfully opened and extracted the seeds of a pomegranate. 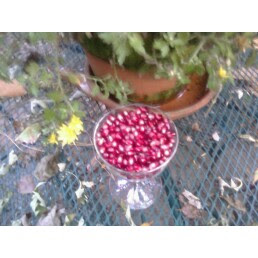 It was ripe because it was a crimson color; the round shape changed to slightly square sides, and the petals on the crown turned inside. It also felt slightly heavy.

In order to get to these precious seeds, I cut off the flowery end of the pomegranate, scored the fruit into sections and soaked the fruit in a bowl of water for five minutes.  Then I broke the sections open in the bowl of water and gently pulled the seeds out with my fingers, letting the seeds sink to the bottom of the bowl.  I threw the rind and membrane away, and I drained the water from the seeds.

Aren't these beautiful seeds!  I would recommend sprinkling them over a bowl of vanilla ice cream or sliced pear. They're delicious in a bowl of cereal and also on a salad.  The possibilities are endless.  Or, you can just plain eat them as is - nothing wrong with that! The pomegranate isn't so intimidating after all!

This is just to keep you busy until I post the first recipe - it's coming soon, I promise!
Posted by BonnieBanters at 6:56 PM 0 comments

Here's a photo of the exotic dragon fruit I mentioned in my last blog: 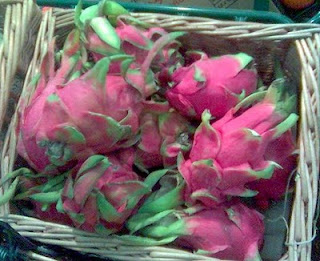 It would be a conversation piece at a special gathering such as a shower...I would just cut in half and stand up in a small custard cup with a spoon inserted.  It's very refreshing, similar to sorbet or sherbet; and the seeds look like poppy seeds...you just eat all of the flesh.
Posted by BonnieBanters at 8:22 PM 0 comments

My goal is to offer interesting tidbits about food and recipes that are unpretentious but delicious - for family or friends!

I don't get "fusion" cooking.  Also, I don't know about you; but when I order a nice fish dish in a nice restaurant, I'm disappointed when it comes out on top of my mashed potatoes!  If  I want to mix my food, I'll do it myself!  Besides, my mother taught me that mixing your food on your plate is bad manners.

I don't pretend to know all about cooking; but I love it, and I like to prepare tasty dishes.  If you want to identify my favorite cuisine, it would be continental or French.  However, I'm a southern belle; so I enjoy an occasional down-home meal (not too much fried stuff though...I try to be a little healthy).

But I do like experimenting just for fun, and I fortunately have an international market across the street.  Have you ever tried a dragon fruit?  Apparently this fruit isn't only beautiful and exotic, it's exceptionally good for you too!  It can help one lose weight, and it is also good for blood pressure. Maybe have one handy when your fish is served on top of your mashed potatoes!


Posted by BonnieBanters at 8:59 PM 0 comments

Bought too much fried chicken and don't know what to do with it?  You're gonna love this fantastic, easy fried chicken salad, sa... 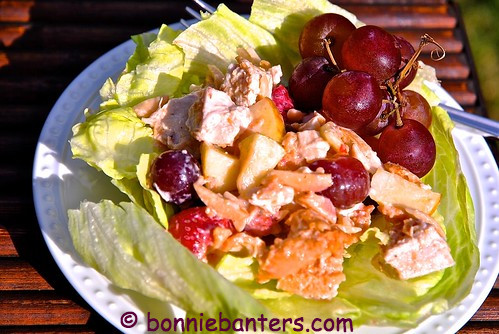