A friend recently passed this funny article with recipe on to me about how to properly cook and eat grits.  If the original author recognizes this, please step forward so I can give appropriate credit (I couldn't find you)!

I, with great hesitation, confess I do not remember the last time I cooked grits that were not instant.  I tested the recipe in the article and found them to be really yummy.  I can't wait to try the fried leftover grits!

I did make a couple of changes (in quotes) of the article for my blog post. When you read this, I hope you get as big a belly laugh as I did!


Yep, They Pass The Test! 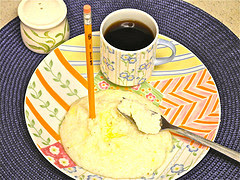 What Are Grits?
(Author Unknown)


Some folks believe Grits are grown on bushes and are harvested by midgets by shaking the bushes after spreading sheets around them. Many people think Grits are made from ground up bits of white corn. These are lies spread by Communists and terrorists.  Nothing as good as a Grits can be made from corn.
Research suggests that the mysterious Manna that "was" rained down upon the Israelites during their time in the Sinai Desert was most likely Grits.  Critics disagree, stating that there is no record of biscuits, butter, salt and red eye gravy raining down from the sky and that "people would not be punished" by forcing them to eat Grits without these key ingredients.

How Grits are Formed:
Grits are formed deep underground under intense heat and pressure. It takes over 1,000 years to form a single Grit. Most of the world's Grit mines are in Georgia, and are guarded day and night by armed guards and attack dogs.  Harvesting Grits is a dangerous occupation, and many Grit miners lose their lives each year so that Grits can continue to be served morning after morning for breakfast--not that having Grits for lunch and dinner is out of the question.

Historical Grits:
As said earlier, the first known mention of Grits was by the Ancient Israelites in the Sinai Desert.  After that, Grits were not heard from for another 1,000 years. Grits were used during this time only during secret religious ceremonies and were kept from the public. The next mention of Grits was found amidst the ruins of the ancient city of Pompeii in a woman's personal diary discovered in the seat of an old sedan. The woman's name was Herculania Jemimana, who was known as Aunt Jemima to her friends.

How to Cook Grits:
For one serving of Grits:  Boil 1.5 cups of water with salt and a little butter. Add 5 Tbsp. of Grits.  Reduce to a simmer and allow the Grits to soak up all the water.  When a pencil stuck into the Grits stands alone, they are done. That's all there is to cooking Grits. (When I used this recipe, I used 1/8 tsp. salt, 1 TB butter and I did not cover the grits (since no mention was made of a lid); and the grits took about 15 minutes to soak up the water using direct, low heat. Also, I found it should be stirred occasionally, and I feel this recipe is enough for one to two servings.)
How to make red eye gravy:  Fry salt-cured country ham in cast-iron pan.  Remove the ham when done and add coffee to the gravy and simmer for several minutes. Great on Grits and biscuits.

How to Eat Grits:
Immediately after removing your Grits from the stove top, add a generous portion of butter or red eye gravy. Do NOT use low-fat butter.
The butter should cause the Grits to turn a wondrous shade of yellow. Hold a banana or a yellow rain slicker next to your Grits.  If the colors match, you have the correct amount of butter. In lieu of butter, pour a generous helping of red eye gravy on your Grits.  Be sure to pour enough to have some left for sopping up with your biscuits.  Use biscuits made from scratch.  Never, ever substitute canned or store-bought biscuits for the real thing because they can cause cancer, tooth decay and impotence. Next, add salt.  The correct ratio of Grit to Salt is 10:1.  Therefore for every 10 Grits, you should have 1 grain of salt.  Now begin eating your Grits.  Always use a fork, never a spoon to eat Grits.  Your Grits should be thick enough so they do not run through the tines of the fork.
The correct beverage to serve with Grits is black coffee. DO NOT use cream or, heaven forbid, skim milk.  Your Grits should rarely be eaten in a bowl because Yankees will think it's Cream of Wheat.

Ways to Eat Leftover Grits:
Leftover Grits are extremely rare and may only be a rumor. Spread them in the bottom of a casserole dish; cover and place them in the refrigerator overnight. The Grits will congeal into a gelatinous mass. The next morning, slice the Grits into squares and fry them in 1/2" of cooking oil and butter until they turn a golden brown. Many people are tempted to pour syrup onto Grits served this way.  This is, of course, unacceptable but delicious.

BLESSING BEFORE EATING GRITS
"Bless" these Grits.
May Yankees never get the recipe.
May I eat Grits each day while living.
And may I die while eating grits.

So, there you have it...how to properly cook and eat grits!  Try them...just be prepared to speak with a Southern drawl after you finish!  Enjoy!